Getting ready for D.C.! 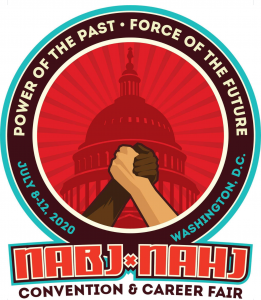 Join NYABJ at the #NABJNAHJ20 Convention & Career Fair in Washington, D.C., this July! We will celebrate our theme: “Power of the Past, Force of the Future.” Registration is NOW open! Link: https://buff.ly/3861qjR

Join us for an extraordinary gathering filled with innovative programs, remarkable presenters and fantastic networking opportunities.

Dear NYABJ Family, Thank you for entrusting me to lead NYABJ over the past four years. It was an honor to serve you for two…

We are excited to announce the 2020 NYABJ Executive Board. We are looking forward to working hard for and with you to make this year…

To the members of The New York Association of Black Journalists and its supporters,   Welcome to 2020 and a new decade of continued growth…

We hope to see you in Miami for the annual NABJ convention and career fair. Four of our board members will be there, so look…